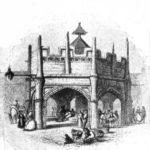 opens IMAGE file During the fourteenth century, the Bridgwater cloth trade expanded considerably and not least because of the good quality of locally made cloth, the speciality being a ratteen, a coarse serge-like cloth known as a “Bridgwater”.  Taunton and Dunster had reputations equal to Bridgwater and cheap imitations were a problem for the local traders.  It became necessary to introduce legislation which made it illegal to sell “Bridgwaters” in a rolled-up form.  The cloth had to be exposed so that the buyers could see that they were getting the real thing.  In 1388, three traders from Taunton were caught illegally selling cloth at Bridgwater market.

Within the walls of the castle there was a fulling mill, tuckers, dyers and  carders.  Outside of the castle, the same businesses would be found in many cottages.  There were also goldsmiths, indicating the wealth from the wool trade, and mercers, men who traded in cloth.  The volume of trade was such that a new slipway on the river had to be built.  This was the Langport slipway built in 1488, paid for by the Abbot of Glastonbury, and is the slipway between the town bridge and the library.