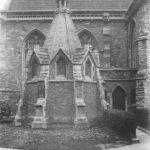 opens IMAGE file The parish church of St Mary the Virgin is certainly the oldest building in the town, largely built in the Early English style but mixed with Decorated and Perpendicular.  Internally, the archway leading to the tower appears to be Early English and from the early thirteenth century.  At the west and north sides of the nave, windows are set in Early English casings. Decorated windows of the fourteenth century can be found elsewhere with the remaining being fifteenth century Perpendicular, indicating how the church was regularly undergoing change in its earlier years.

The earliest record we have of a vicar is that of Richard in 1280.  In 1318-19, a great bell was cast .  This being the case, it is safe to assume that the tower as we know it today, albeit without the spire, was existent before 1318.  We know that  opens in a new windowWilliam Brewer was re-building it in the early 1200s, on the site where Merleswain had his earlier Saxon timber church. In 1367 work was commenced on the spire, built by Nicholas Waleys from Bristol. The work was slow since it was realised that the spire was going to be too heavy for the tower and first the tower had to be strengthened by the addition of buttresses.  In the 1440s, when the spire needed repair, it was Thomas Stipilman, presumably a steeple man or jack, who was brought into the town for a ten-week stay.  Around the same time, John Glayser was brought in from Wells to work on the church windows.  In these names we can see how a person’s trade was still the defining factor for the choice of surname.

The red stone of the 174 foot high tower came from Wembdon and the fawn sandstone from Ham Hill, floated down the river on barges.  It was from this tower that the  opens in a new windowDuke of Monmouth surveyed the king’s troops’ encampment at Westonzoyland in 1685.  Indeed, the church was the last the Duke was ever to enter, being executed 11 days later.  The nave is of Blue Lias from central Somerset and was roofed with lead from Wells.  Within the grounds of the church were Yew trees which were surrounded by stake fences to prevent pilferage of the branches.  These were keenly sought for use as long bows. At one time, the church grounds were also protected by iron railings running around the grounds but these disappeared when metal was required for the war effort.  Within the church are eight bells, 3 mediaeval and 5 Elizabethan. A one-time vestry has long since disappeared. 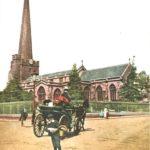 opens IMAGE file At the time of the Act of Supremacy, which passed control of the church to Henry Vlll and away from Rome, St Mary’s church survived unscathed. Thomas Strete was the vicar and it must have been a difficult period for him as he watched the  opens in a new windowGrey Friars disappear and then the brothers of St. John’s, with nothing to replace the invaluable service these houses provided. Within his own church, the chantry priests disappeared, as did the nuns of Cannington.  Their disappearance would have saddened him but imagine his horror at the news in 1539 regarding Abbot Whiting of Glastonbury. Eighty-year-old Whiting had resisted the change and paid with his life. Executed on Glastonbury Tor, he was hanged and then drawn.  His head was then removed and displayed in Glastonbury whilst the rest of his body was quartered and a quarter delivered by cart to Bridgwater where it was stuck up contemptuously on the East Gate, where the Cobblestones Inn now stands. Thomas Strete survived those difficult days and remained as the vicar at St Mary’s through the reigns of Henry Vlll, Edward Vl, Mary and Elizabeth, passing away after 43 years in the role.