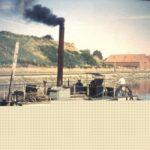 opens IMAGE file Road traffic at the dock was facilitated by a bascule bridge, again believed to be of a Brunel design, and this is the bridge over which traffic still goes today.  Completing Brunel’s contribution to the dock’s infrastructure was the dredger, Bertha.  The main problem for the dock operators was heavy silting.  Bertha, the steam-driven dredger, was designed such that she would run up and down a chain from one end of the dock to the other.  At the end of each journey, the chain would be moved a bit further across the end of the dock, so that over a period of several trips, she had covered the entire dock basin.  Imagine if the dock were drained and a bulldozer was used to push the silt deposit to one end of the dock.  The bulldozer blade is down in one direction and up in the other.  That was how Bertha  worked, but under the water.