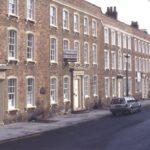 opens IMAGE file Possibly one of the finest Georgian streets outside of Bath, Bridgwater’s Castle Street was built between 1720 and 1723 on the instruction of the Duke of Chandos, one of the world’s wealthiest men, arguably wealthier at the time than the king himself.  The civil war was nearly forty years into the past and the castle had been destroyed.  James Bridges, the Duke of Chandos, was the Console General of Queen Anne’s army and had been charged with the task of the disposal of the castle.  It was under his instructions that Castle Street was built by local craftsmen under the architect Benjamin Holloway, who also built The Lions in 1720 on the West Quay for his own use.

Whilst Castle Street looks very uniform in design, closer inspection shows that each doorway is of individual character.  Likewise with the porches and windows.  Another legacy left by the Duke of Chandos was the glass kiln near Valetta Place.  It was one of a number of failed attempts by the duke to develop various industries in Bridgwater.  His soap works failed in 1725, as did his Eastover-based distillery.  The glass kiln was built in 1726. It was abandoned in 1733 but later resurrected as a pottery kiln until 1942, having served as a prison for French captives in the Napoleonic Wars.  It was destroyed in 1942 when hardcore was required to extend the runways at Westonzoyland aerodrome when the Americans joined the war.  It was a sad end to a building, the stump of which was granted listed building status in 1977.