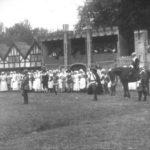 opens IMAGE file In 1645, the English Civil War, in which Bridgwater’s  opens in a new windowAdmiral Blake played such a key role, visited the town.  The conflict was between the Royalists and the Roundheads who favoured Parliament. In April 1645, Prince Rupert summoned a meeting, at  opens in a new windowBridgwater Castle in order to co-ordinate their activities. By July, the Parliamentarian forces of General Sir Thomas Fairfax, Lieutenant-General Cromwell and Major-General Massey arrived at Bridgwater.  They reflected on the strategic significance of the Royalist-held Bridgwater Castle. They had just had a couple of days rest camped at Westonzoyland, having routed the Royalist forces at Langport, many of whom had made their way to the perceived safety of Bridgwater Castle.

A group of Roundheads captured Sydenham Manor, a Royalist household. One hundred Royalist horse were captured.  Another group took Hamp; and in the channel, Royalist ships were intercepted to stop supplies reaching the castle which was under the control of its governor, Colonel Wyndham. Meanwhile Fairfax and Cromwell carried out a reconnaissance and found the castle well defended with 1,800 troops and 40 or more guns.  There was also the problem of the significant moat.  As the two men surveyed the scene, they drew the attention of Lady Christabella Wyndham, wife of the governor. Having heard that Cromwell was on the opposite bank of the river, she found herself a loaded musket, went to the ramparts of the castle, exposed one breast to her enemies and fired a shot at Cromwell.  Her aim was somewhat off and she shot the officer’s sergeant-at-arms.  She later sent a messenger to Fairfax asking if he had received her “love token”.  But why should she expose one breast?  It was an insult.  She had been the wet nurse to Charles ll when he was the young Prince of Wales.  Later on, she was also to complete his education in the art of love making which, according to Antonia Fraser’s autobiography of Charles ll, took place within Bridgwater Castle just before his fifteenth birthday.  The following year he was having his first serious affair in Jersey and was later to become famous for his numerous liaisons, including that with Nell Gwynne. 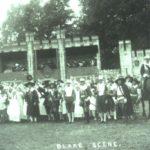 opens IMAGE file An attempt to storm the castle by night, by filling the moat with faggots of wood, was foiled by the sheer depth of the moat.  Several days later, the decision was made to storm the castle.  The Roundhead forces were all stationed on the Eastover side of the river, camped at Castle Fields and parading around East Bower and Horsey.  It was 20 July and Massey took a contingent to attack the castle from the south as a diversionary tactic. Lieutenant-Colonel Hewson was to attack from the north-east.  But first Eastover had to be captured, being an area within a ditched defence.  In the early morning, Eastover was attacked.  The Roundhead forces crossed the ditch, using floating bridges, from the Castle Fields side.  Captain Reynolds crossed the ditch at St John’s and took control of the east gate, lowering the drawbridge and capturing Eastover and 600 prisoners.  His troops fought all the way to the river pushing Sir John Stawell’s Royalists back across the river bridge which was then barricaded as the drawbridge was raised.

Up at the  opens in a new windowCornhill and around the church, the Royalists were coming under fire from their own captured guns.  Fairfax regrouped his troops and prepared for the next major assault.  Heavy fire from all sides forced the Royalists into the castle.  When one part of the castle was captured, many of the troops changed allegiance and fought for the Roundheads. Wyndham, within the castle, fought back, with his guns firing incendiaries into Eastover where all but three or four houses were razed to the ground.  This accounts for the complete lack of any houses prior to 1654 in that part of the town.  Fairfax twice called unsuccessfully for the Royalists to surrender.  Mrs. Wyndham, clutching her bosom, told the messenger “Tell your masters that the breast which gave suck to Prince Charles shall never be at their mercy;  we will hold the town to the last!”. The following day, Fairfax’s troops prepared to storm the castle again but first Fairfax offered safe passage to the women and children and 800 took advantage including Mrs. Wyndham.

When battle commenced, the besiegers redoubled the cannonade and fires were taking hold all over the town, fanned by high winds.  Wyndham realised the futility of continuing the defence.  With 15,000 Roundheads outside the castle, the outcome was inevitable and prolonging the battle would simply cause more destruction.  By the evening of July 23, it was all over.  Eastover has been destroyed.  Across the river, half the town had been ruined.  In 1646, Parliament agreed to the destruction of the castle.  In November of that year, a troop of horse entered the town to commence its demolition.