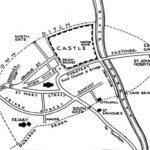 opens IMAGE file Although the entrances to the town were gates, one at each point of the compass, the town was not walled.  Rather it was contained within a series of ditches, rows of houses and the Durleigh Brook.  Within the rough oval shape were contained the following in the year 1444 when the population was about 1600:

*Notice that the High Street is not mentioned.  This is because the street was so wide, with an island down the middle, that it was classed as two, i.e. North Street and South Street, not to be confused with the present North Street which in mediaeval days was known as the Kidsbury or Wembdon way. The island in the middle of the High Street included the Cornchepyng, the corn exchange, and near that was the Cokenrewe with the Tolsey or tollhouse. This cluster of buildings would have been more or less where the current  opens in a new windowTown Hall stands.  “Twixt church and Bridge” became known as Fore Street in 1367. 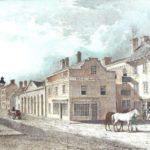 opens IMAGE file Dampiet Street existed as Damyate, indicating the way by the dam.  The dam would have existed on the town brook where corn was ground at the Little Mill.  Silver Street was known as “Twixt the parish church and Friars Minor”. Horsepond Lane, in the same area, was known as “Weyhur” which translates as horse pond.  Eastover gained its name in 1357 prior to which it was “Twixt Hospital and Bridge”.

Clare Street was Orloue (or Orfaire) Street and Market Street was Paynel Street, hence  opens in a new windowPenel Orlieubeing at the junction of the two.  The origin of Orloue or Orfaire can be found in the Saxon word orfmeaning cattle.  Orfaire was the cattle market and this fits perfectly with the area where cattle were sold right up to the 1920s.  So this gives us the origin of Penel Orlieu being where Paynel Street and Orlieu Street joined.  Understanding its origins, however, makes it no easier to spell.

In those early days, it appears that a bridge also existed serving the track between Hamp and Sydenham, crossing the river almost certainly at the same point that the Broadway bridge does today and where there was once a Lime Kiln, hence the name of the inn at that point.  Oldmixon, the chronicler, refers to an old wooden bridge here in contrast to the Great Bridge to which he also refers.  In 1538, Leland, the king’s chronicler, visited the town and reported his finding as follows:

The way or I came into Bridgwater was caused with stone more than half a mile.  Entering into Bridgwater I passed by a chapel of St Salvior standing in the ripe of the haven.  Then I entered into a suburb and so over a bridge under which runneth a brook that risith a 4 miles of by West at Bromefelde.  The south gate of the town joineth hard onto this bridge.

The town of Bridgwater is not walled nor hath been by any likelihood that I saw.  Yet there be four gates in the town named as they be set. The walls of the stonehouses of the town be instead of the town walls. I rode from the south gate in a pretty street a while and then I turned east and came to the market place.  The farrest street and principal show of the town is from westgate to eastgate.  There is a right ancient and high bridge of three arches.  That part of the town that standeth on the west side of the bridge and haven is three times as big as that that standeth on the east side.  The castle sometime a right fair and strong piece of work but now all going to mere ruin standeth hard beneath the bridge of the west side of the haven.

In the Est part of the town is onely the House, late College of St John, a thing notable, and this house standeth partly without the est gate. This college had prestes that had the apparel of secular prestes, with a cross on the breste, and to this house adjoins an Hospice for poor folks.