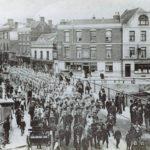 opens IMAGE file Bridgwater was well served with the instruments of law and order.  It had its own police force and regiment.  During the years when Napoleon posed a threat, it was necessary for each district to have its own militia.  In 1803, 20,000 men enrolled in the Yeomanry or Volunteer Corps in Somerset alone, from a population of just below 90,000.  In 1794, Bridgwater already had two companies of Volunteer Infantry.  The Bridgwater Volunteers started with 60 privates in each company and by 1795 had their own quartermaster and surgeon.  Their adjutant was John Crosse who was paid 8s a day including 2s for his horse.  Their commandant was the MP, Lt-Colonel Jeffreys Allen. That same year, Lady Poulett presented the Volunteers with their colours. The regiment grew to five companies of 70 men in each and their duties included escorting French prisoners from Plymouth to Bristol.  In 1865, there is the first mention of the Bridgwater Troop of the West Somerset Yeomanry, commanded by Lt-Colonel C K K Tynte.