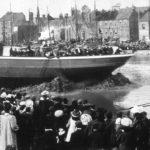 opens IMAGE file The twice-daily tidal wave which pushes up the River Parrett, known as the bore, is usually on innocuous affair attracting little or no attention as it travels at about 6 miles per hour.  However on the spring tides, and when the wind is in the right direction, its impact can have greater significance. In 1875, the tidal bore stood at 10 feet high, sufficient to flood most of low-lying Somerset.

With a 30 foot tidal rise and fall, and limited space along the quayside, the logic of having a dock with a constant water level became clear.  It was 1840 when the dock as we see it today was built.  In 1820, the Bridgwater to Taunton Canal scheme was proposed mainly in order to combat the problems of the river silting up to such an extent that the river was impassable at its higher reaches after long, dry spells.  In 1827, the canal was opened from Taunton to Huntworth, where it linked to the river.  This created a price war between the Tone Navigators and the canal owners which did neither side any good and resulted in numerous court cases over the period of five years.  In the end, the problem was only resolved when the canal company bought out the competitors.  In 1837, Royal Assent was granted to extend the canal to Bridgwater and to build a dock.

The engineer in charge was Thomas Maddicks, of Devon.  105,000 cubic feet of clay were dug out by a workforce of hundreds of navvies.  There was only one fatality in its construction, caused by a wagon carrying a 6-ton stone from Puriton running out of control in a thunderstorm.  One major feat of engineering was the creation of the cut where the canal passed through the area from Albert Street to Victoria Road where the passageway carved through the red sandstone earned itself the name of The Canyon. Sadly Thomas Maddicks died in the poorhouse in Taunton aged 84.

By 1838, the Grand Western Canal had been linked to the Bridgwater to Taunton canal at the Taunton end.  This meant that once the canal was opened all the way to Bridgwater, it was possible to travel from Bridgwater to Tiverton by canal. 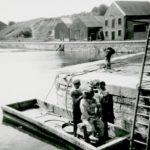 opens IMAGE file The dock finally opened in 1841 and on 25 March, the Bridgwater built sloop the Henry glided through the lock gates with Captain Giles Billing at the helm, towed by the port’s first steam tug, the Endeavour, which had sailed down the river to meet her, complete with a band providing the music.  Thousands of locals lined the docksides, the day having been declared a Bank Holiday.  Cannons fired and church bells rang, the national anthem was sung and both the George Hotel and Royal Clarence were filled to capacity providing celebratory dinners.  From that day on, ships of up to 180 feet in length and 31 feet across could enter the safety of the dock.

At the quayside, the infrastructure of the docks had already begun. Wares Warehouse was built in three phases.  The three bays at the canal end were bonded warehouses for the canal company.  The rest was added for the Bristol and Exeter Railway Company (later to be part of the Great Western). Diagonally opposite, across the dock, was the Bowering’s animal feed mill which still survives alongside the Newtown Lock.  To add to the infrastructure, a link was required to the Bristol to Exeter Railway which reached the town in 1841.  That required throwing a railway bridge across the river but such a bridge would stop the tall masted sailing ships reaching the quaysides and the dock.  And so a bridge was designed by Isambard Kingdom Brunel which we know today as the Black Bridge.  It was a steam-driven telescopic bridge. Opened in 1871, initially the only traffic over it was horse-drawn, and a similar horse-drawn railway link existed which ran down to Dunball.

The telescopic bridge was supported on two large piers, one each side of the river.  When ships came up the river, a section of the rail track on the east side of the river, would be slid sideways into an otherwise open space alongside the track.  This then created a gap where the line had previously been which provided the space for a section of the bridge to be retracted back, rolling on small wheels beneath the bridge.  The whole exercise was powered by a steam-driven engine, the greater part of which was destroyed by British Rail.  The engine does however survive in the care of the Westonzoyland Engine Trust.