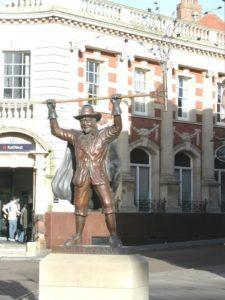 opens IMAGE file Unique to Bridgwater, just like the squibbing, are the Carnival Concerts which have been an integral part of the festivities for well over a hundred years.  These concerts are performed by the Bridgwater clubs as part of their fund raising programme but these days the importance of the concerts as part of the overall competition has greater significance than the income they generate.  The very first concert was held on Wednesday, 31 October 1883 in the Bridgwater Town Hall and from its inception, that first night was a sell out.  Originally a fairly amateur affair, this annual fiesta has reached very high standards of theatrical entertainment, in many cases matching the highest professional standards of stage craft – but it wasn’t always thus.

It all began with Bridgwater having a new town bridge in 1883.  It was decided that the official opening would take advantage of the carnival procession to make it an even more notable affair.  The carnival committee decided that to do justice to the occasion, they would have a firework extravaganza with sky rockets, Roman candles and 300 blazing torches.  But the money for this needed to be raised and it fell to the Bridgwater Amateur Christy’s Band to come to the rescue.  They organised a concert.  Not a single carnival club appears to have been performing unless those in the cast had been from the clubs themselves.  It was a complete contrast to the shows we can witness today.  According to press reports, over 1,200 people formed the nightly audience.

Recent decades have seen considerable improvements in the stage performances. Choreographers first made an appearance in the 1960’s and immediately the difference they made was obvious.  Nowadays we can see the full range of dance movements, significantly enhancing the enjoyment.  Advances have also been made in the provision of the supporting music.  In my early days, it was not unusual for the band and performers to be completely out of synchronisation. I remember one occasion when the band master turned over two pages of music instead of one.  He played one number whilst we sang another.  On another occasion, thanks to the pace at which the band played, an eight and a half minutes performance on the opening night became a six minute performance on the second and we all left the stage breathless.  With synthesised music used these days, the performers can be confident that each performance will reach the high standards they now set themselves.