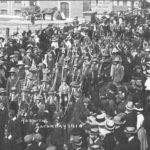 opens IMAGE file The earliest reference to a fire engine in Bridgwater was in 1725 when the controversial George Bubb Doddington donated one to the town.  In 1830 the engine, almost certainly not the 1725 version, was kept near the south gate.  By 1880, the brigade was based around the back of the Town Hall in Clare Street where a new fire station was built in 1906.  At that time Bridgwater was much smaller than it is today.  There was no housing as such beyond the railway line, no Hamp or Durleigh estates.  The fire brigade was made of volunteers who lived and worked near the town centre.  When the alarm bell sounded, they would run to the station and the first two to arrive would drag out the wheeled water pump and start running with it to the fire, the later arrivals catching up on bicycles.  On one occasion they were timed at eight minutes from arrival at the station to reaching the fire.  In 1935, life got easier when a petrol-driven engine arrived.  In 1964 the brigade moved to its current headquarters in Colley Lane, after a short spell based at the cattle market in Bath Road.