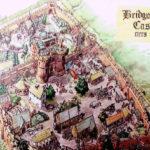 opens IMAGE file Prior to the arrival of William the Conqueror in 1066, Harold was on the throne and Bridgwater, still called just Bryj, was just one of many communities which came under the lordship of the Saxon Merleswain. Merleswain wasn’t even a local man. He was the Sheriff of Lincolnshire but a close friend of the king.  So Bridgwater was in his lordship, and in the North Petherton Hundred. In other words it was not the centre of the local universe, North Petherton was. The size of Bridgwater in 998 AD, relative to its neighbours can be gathered from the Dane-geld collected, i.e. the taxes which were collected, were as follows:

In 1066, William invaded England and gave parcels of land to his supporters as a thank you gift.  Bridgwater, Wembdon, Bawdrip, Horsey, Pawlett, Huntspill, Burnham and Brean, and various other manors, were given to Walter from Douai in France.  Walter however took up residence in Bampton in Devon, but Bryj, the quayside on the River Parrett, now belonged to him and henceforth would be known as Walter’s Quayside, Bryj of Walter, Bridgwater.  This explains the lack of the extra ‘e’ in the middle of the town’s name – so it’s not the ‘e’ that’s missing but the ‘l’ from Walter.

The Saxon days were over but Saxon names survived. Sydenham was Saxon for wide meadow, Hamp was a homestead, Bryg was a quayside, or some believe a fording place, and the town was split into Eastover and Westover, in fact ‘estufer’ and ‘westufer’, ufer being Saxon for bank, hence east and west bank.  But there was still no bridge!  In 1086, the Domesday Book recorded the following, albeit in Latin:

Walter holds Brugie.  Merleswain held it at the time of King Edward, and it was assessed at the Dane-Geld for 5 hides.  The arable  land is 10 carucates.  In demesne (the land held by the Lord himself) are 3 carucates and 5 servants, 13 villanes (slaves), 9 bordars (wood cutters and the like) and 5 cottagers with 8 ploughs.  There is  a mill of 5 shillings rent and 10 acres of meadow, and 100 acres of coppiced wood and 30 acres of pasture.  When Walter received it, it was worth 100 shillings (£5) and is now worth £7

A hide is basically an extended family and the land which supports them. A carucate can be equated to the amount of land an ox is capable of ploughing. So we have a picture of a small community, perhaps five extended families and nearby there was Sydenham, a quarter of a hide, and Hamp with its 1 hide, 4 ploughs, 4 slaves, 1 villager, 7 smallholders with 1 plough, 15 acres of meadow and 3 acres of woodland.  Each of these was a separate community. Then, on each side of the town there appeared to be the farms which gave us East Bower and West Bower, the latter on the edge of Durleigh.