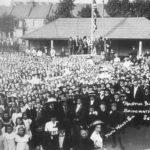 opens IMAGE file The twentieth century for Bridgwater was dominated by matters both local and national.  It was a century which saw two world wars and was dominated by the decline of the docks and brick and tile trade and the rise and fall of the local Cellophane plant which employed a high percentage of the local labour force.  But we begin by taking a look at the first decade, before the advent of the first world war, a decade which saw the launch of the last Bridgwater-built ketch.