Take a visit to the Bristol Road cemetery and as you walk along the entrance path leading down through the graves, there in the top right corner of the field is a white marble cross with the caption ‘Erected by friends to commemorate one of the gallant six hundred’.  It is the last resting place of Denis Heron who once lived on the Salmon Parade.  His story and is fully described in The Forgotten Heroes of Bridgwater and Somerset’s Forgotten Heroes.  Suffice it here to say that he rode in the memorable Charge of the Light Brigade as one of the 4th Light Dragoons.

To recognise the presence of this hero, in 1857, three years after the Charge, the borough council petitioned Parliament for the provision of a Russian cannon captured in the Crimea.  The gun was granted and was welcomed by bands of music  as it was processed through the town and placed outside Heron’s house, between the town bridge and the hospital.  In 1883, the cannon was moved to the junction of the Bath and Bristol Roads, a junction which henceforth became known as “The Cannon”.  It eventually disappeared, taken for scrap for the war effort.  In more recent years, a replica has been installed on the same spot, a timely reminder of a forgotten hero. 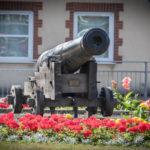 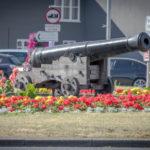 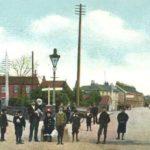