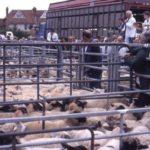 Fish, fowl, fruit and vegetables were sold in the  opens in a new windowCornhill area.  There were two market crosses in Bridgwater and one of these, known as the High Cross, was at the Cornhill in a position which would now place it in the middle of the road between the dome and the Lloyd’s TSB bank premises. It was octagonal in shape.  The cross was used for the sale of various items but especially fish.  In 1694, a water tank was added to the roof to hold water for the town centre community.  It was finally pulled down in 1827, having also served as a gallows at the time of the  opens in a new windowMonmouth Rebellion. It carried an interesting motto of “Mind your own business”. 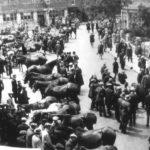 opens IMAGE file The other cross was the Pig Cross, a simple shaft with an orb atop, a replica of which can now be found at the Town Bridge end of Fore Street. The Pig Cross was at  opens in a new windowPenel Orlieu, where cattle and pigs were sold, sheep being sold in West Street, and was destroyed in 1830.  It is believed that ‘Pig’ is not derived from the animal but rather from ‘Pigens’, an ancient manor which existed in the town.