Bridgwater’s most unusual place name is derived from the junction of Orloue Street (later to be called Prickett’s Lane and now Market Street) and Paynell Street (now Clare Street). Until 1935 this was the centre of the cattle market and it was in this area that cattle and pigs were sold, sheep being dealt with in West Street.  Where the cinema now stands and the adjacent car park was the market area.

This also used to be the site of the Three Tuns Inn which was demolished to make way for the market. 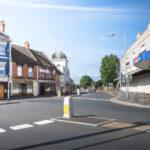 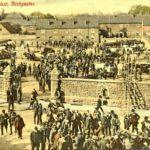