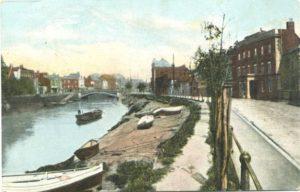 opens IMAGE file Once called Salmon Lane, this riverside road is dominated by the town’s hospital, but between it and the bridge is an interesting row of former fishermen’s cottages.  Salmon was one of the main catches and, whilst it seems amazing that salmon could have run in such a river, in my childhood I used to watch as they ran upstream.  Presumably pollution has brought their days to an end but at one time they were a source of revenue. Their decline began in the 1930s, almost certainly with the opening of the local Cellophane plant, but once as many as 20 men were licensed to fish the river for salmon.

Eels were another source of food in plentiful supply in the River Parrett and in June 1859 there was a Sturgeon which weighed in at 160 lbs.  It was sold at the market at 6d per pound.  In 1913, a 168 lb. porpoise was captured in Bridgwater by Henry Laver.