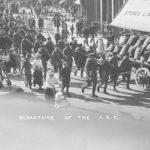 opens IMAGE file When the war against Germany began in 1914, there was a feeling of euphoria. “It’ll all be over by Christmas” was the general belief and hundreds signed up to serve their country.  Hundreds of Bridgwater men were destined never to return and their names, over three hundred in total, are engraved on the war memorial in King Square.

So many men went to the war that the immediate effect at home was that wages rose by a shilling a week.  Wicker baskets, shirts and bandoliers for the fighting men took priority on the list of items produced locally. Those who went and fought were promised a ‘land fit for heroes’ on their return.  But it was some while in coming.  The centre of Bridgwater was packed with tiny cottages in tiny courts, where people lived in poverty. It wasn’t until the late 1920s and 1930s that the slum clearance began with residents being re-housed on the Newtown estate and Taunton Road.  But not many could afford the rents by then with one man in every three being unemployed.

West Street had the highest density of courts with 17 in the one street.  Friarn Street and St John Street had similar examples.  Narrow archways led into these small circular courtyards where two-up two-down cottages clustered around the limited space.  In the mid-nineteenth century these courtyards had been rife with cholera and in 1938 it was typhoid from which the residents suffered.  Schools and public meeting places were closed.  As the undertakers collected the bodies of those who died, so the mattresses and bedding were taken away for burning.  It was the construction of the houses along Kidsbury Road in 1927 which heralded the introduction of decent housing.