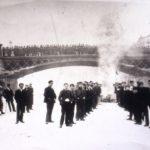 opens IMAGE file We can date shipping in Bridgwater back to at least 1200 AD.   opens in a new windowWilliam Brewer was granted the rights to collect lastage, a tax on cargoes.  In 1233 the constable of Bridgwater was ordered to assist the abbots and monks of Tewkesbury in shipping timber and lead from Bridgwater for the repair of their church.  In 1277, the Patent Rolls record sailors of Bridgwater being summoned to assist Edward l in his Welsh campaign. In 1300, Simon de Montacute owned two galleys and a barge at Bridgwater.  In 1306, the Sauneye, mastered by William de Wyght of Bridgwater carried lead to Gascony.  In 1311, Thomas Kirkeby was ordered to superintend the provisioning of a Bridgwater ship to join the fight against Robert the Bruce, with supplies for seven weeks.  In 1314, 1317 and 1322, Bridgwater supplied further ships for the Scottish Wars, the latter of these being a voyage to transport soldiers from Ireland to Scotland.

Wheat, beans and pulses, bacon pigs and other agricultural produce moved through the port in considerable quantities.  Much of this was exported to France, Spain and Ireland by traders such as David le Palmer, John Cole and John Michel.  Much of the shipping in those days of the fourteenth century was in wine and in 1396 an extra strong wooden gangway was constructed to help with the unloading of the huge wine containers.  In 1360 Adam Beste received two tuns (a tun is 216 gallons) from Dunwich on the Suffolk coast. Imports in the fourteenth century included wine from Bordeaux and herring from the channel.  Later imports included timber, twine, hemp, linseed, esparto grass, hides and valonia, the latter item being produced from acorns and used as a dye in tanning.  By 1488, the trade in wool and cloth had increased so much that a new slipway was built, using stone from Pidsbury, to handle the traffic to Langport.

By the 1480s, around a thousand rolls of cloth per year were being exported. By the sixteenth century exports included serges and in later centuries timber, pit props, cement, plaster of Paris, gypsum, and bricks, tiles and pipes from the clay works of more recent times, by which time coal and timber dominated the imports.

It would appear that the town was in decline during this period.  When John Leland visited in 1540, he recorded that 200 homes were in a state of ruin and a quarter of a century later the population had shrunk back to pre-1440 levels.  With this decline, the focus of attention moved away from the castle towards the port. Thus it was the ship owners and traders who became most influential.  Undoubtedly periods of conflict with the French and Spanish made trade difficult.  The need to be able to trade effectively with the continent can be recognised in the actions of Mr. Boyes, the mayor, and Mssrs. Newport, Watkyns and Moleyns who were amongst the Bridgwater traders who donated swords, daggers, armour, poleaxes, bows and arrows, and various other items to help regain control of the port of Calais.  In 1569, the town supplied billmen, pikemen, gunners and archers, armour and various weapons to help fight the Spanish.

By 1592, the number of ships registered at Bridgwater had declined to seven, ranging from 10 tons to 30 tons.  By the end of 1596, there was just one barque recorded.  Undoubtedly in the post-Armada period, trade had dried up.  The sixteenth century had ended in depression for Bridgwater and the century to follow offered further difficult times.  The town had to wait
for a hundred years before  opens in a new windowtrade really picked up again.