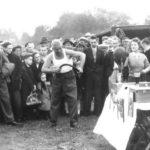 opens IMAGE file The vibrancy of any town could be measured by the success or otherwise of its fairs and markets.  In the mid-thirteenth century Bridgwater, with its 300 burgages, had 13 stalls and 5 shops.  It also had 3 Jews, only two being licensed to act as bankers and moneylenders, these were Bateman, the resident Jew and Mampson, who appeared to be more seasonal.  But the third Jew, Koket, had been fined for trespass.  Goldsmiths, wine merchants and all those trades associated with the wool industry were to be found.

The earliest record we have of a fair is the 8-day fair granted by King John in the charter of 1200 AD, starting on June 24th.  It survived until its quiet disappearance in 1357.  The following year, other fairs took its place.  The Ascension fair was held when cherries were in season and lasted until around 1900 by which time it had become a shoe and cloth fair.  There was a mid-summer horse and shoe fair which was originally held in George Lane and then moved to Dampiet Street.  Records of 1831 refer to it as the smallest of fairs with beef and lamb being traded but predominantly cart horses.  There was a Lent fair held on the second Thursday in Lent.  It commenced in 1468 and traded in cows, calves, cheese, bacon and cloth. The Christmas Fair had similar commodities but was on December 27th or 28th. A summer horse fair, held in Eastover, raised funds for St John’s chapel and lasted until the early 1900s.