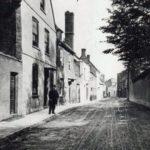 Around 1230, following in his father’s footsteps, William Brewer’s son, also William, who served with distinction in the crusades, opened the Grey Friars’, or Friar Minor’s, Franciscan priory in Friarn Street.  The land had been donated in 1246 and the king granted Richard de Plessy, the keeper of the parks, permission for 5 oak trees to be taken from North Petherton forest to be used as timber in building the priory.  These were felled in 1250, 1278 and again in 1284 suggesting gradual expansion.  The low-lying meadows along Durleigh Brook formed part of the property of the priory.Hamp Brook probably formed another boundary since in 1371 the Friars Minor had to answer a complaint that they had failed to keep the brook clean. The building itself was “10 steppys” in length, about 210 feet.  An old arched doorway in Silver Street is believed to be the sole relic of this long vanished priory.  Recent archaeological exploration has given us confirmation of the site and size of the establishment.