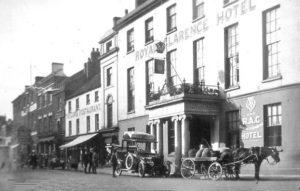 opens IMAGE file For many years, Bridgwater’s premier hotel was the Royal Clarence.  It was built in 1825 in the Regency style on the site of the former Angel and The Crown.  It was originally called the Royal Hotel until an occasion when the Duke of Clarence, later to become William lV, was passing through the town and changed his horses at The Royal.  The proprietor sought his majesty’s permission to add Clarence in honour of the visit.  The plaque on the front of the portico was taken from the old town bridge in 1883.