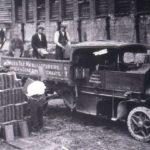 opens IMAGE file Despite its name, Bath Brick was a Bridgwater product.  Anywhere the British army went, the Bath Brick went likewise.  It started in 1820 when it was discovered that using silt from the river bank, bricks could be made which when scraped would produce a gritty substance suitable for scouring metal. It was a predecessor to Vim and Ajax.  The river carries a heavy burden of silt.  This is deposited on each tide as a layer of slimy yellow matter. Within a mile of either side of the town bridge, the particle size of the grit, and the algae content, is perfect for making the Bath Bricks.  Square pens were constructed on the river bank to trap the silt.  After two or three months, this would be ‘harvested’, ground by a horse-driven mechanism and shaped into bricks for kiln-firing.

The bricks, some two or three inches across, were patented in 1827 by John Browne and became a world-wide commodity.  They were given the name of Bath Brick since the colour after firing closely resembled that of Bath stone.  At its peak, 24,000,000 bricks per year were being produced by ten different Bridgwater companies, especially during First World War when they were part of the soldier’s standard kit issue.  By the start of First World War l, they had been replaced by those tall cans of kitchen scourers.