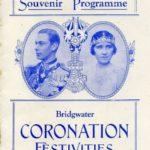 The 1930s proved a desperate time for the working community  In 1933 over two thousand were  unemployed in the town and massive queues formed around King Square leading to the Labour Exchange.  Children scavenged around waste bins, looking for food and clothing.  Three quarters of the children in the town’s six elementary schools were in rags with cardboard stuffed into their shoes.  Despite their poverty, the children were well behaved, the cane still being in regular use.  Child mortality levels were high with children’s coffins made of thin wood to keep down the cost.  The presence of three pawnbrokers reflected the dire needs of the townspeople. There was Best’s at the Cornhill, Paul’s in Eastover and Fred Evis in George Street, complete with the three balls of the pawnbroker over the doorway. It was not until 1955 that this one finally closed.

With unemployment at 30%, Bridgwater was desperate to attract a major manufacturer and Courtaulds provided the solution.  In 1934 the reservoir was opened at Ashford, and in 1938 the Durleigh Reservoir was opened.  When the rest of the country was suffering from a drought with water rationing, Bridgwater hit the headlines because it was one of the few towns not to be rationed.  Courtaulds were discussing where they could open the country’s first production unit manufacturing the new commodity – “Cellophane”.  They needed a workforce of thousands, easy access to tidal waters to take away the effluent and a reliable supply of water.  Their attention was drawn to Bridgwater.  The plant was to employ more than 2,500 employees in its heydays of the 1960s to 1980s.  Inevitably substitute products such as polypropylene diminished the demand and the factory, which commenced production in 1938, finally closed in 2005 by which time the workforce was below 250.

Meanwhile, the town remained a market town but the trade was outgrowing the limited space in the Penel Orlieu area where the cattle and pigs were sold.  In 1935 the market was moved to its Bath Road site where it remained in operation until the 1990s.