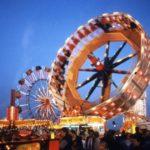 opens IMAGE file The giant fair which survives today is St Matthew’s Fair and dates backto 1249.  Its charter was renewed in 1613.  For centuries it has formed a high spot in the social calendar and has been held on the same sight for most of that time.  Originally held in the centre of the town, by 1404 it had grown so large as to be moved to St Matthew’s Field and West Street.  Once held on September 21st, it now commences on the last Wednesday in September lasting for four days.  It was a one day fair until 1857 when a local act was passed to make it three days.  Then in 1919, the weather was so disastrous that a fourth day was granted to help the traders, and it has remained as four days ever since.

Today it is significant as a funfair but it once served as a hiring fair at which large numbers of sheep and ponies were sold, many of these having been rounded up from the Quantock Hills.  In 1881, there were 700 horses and ponies on sale.  In 1893 nearly 5,000 sheep were auctioned.  Four years later, in 1897, there were three auctioneers who between them sold hundreds of horses and around 7,000 ewes.  The problem was that they achieved this in torrential rain and the field was left as a quagmire after being trampled by around 8,000 sheep and ponies.

Historically the fair had a great social significance. Seldom during the farming year would farm labourers have the opportunity to leave their place of employment or to go beyond the bounds of the village in which they lived.  Well-to-do families would rent a house in the town for a week. Working families could go to the fair, hire themselves out individually, and end up scattered around the county, not seeing each other until the next Bridgwater fair.  Men and women would line themselves up for sale, each carrying the tools of their trade; the shepherd with his crook, the stockman with his whip, the milkmaid with her stool.  During the nineteenth century, the Thursday of the fair became known as “Servant’s Day” since this was the day when shop workers would take up new employment and the Friday night was for factory and domestic workers.  It has also been a traditional gathering place for Romany Gypsies, in like fashion to Priddy Sheep fair, where perhaps again it is the pony sales which are the attraction.

Apart from the social aspect, trade was vitally important.  Imagine not leaving your village to go shopping other than that once a year trip to the fair.  The pots and pans, rolls of cloth, boots and shoes, hats, coats, tools and all the other items except the day-to-day food could be bought at the fair.  Perhaps it is no wander that at one year’s fair there were more than 150 stalls selling just boots and shoes. 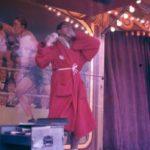 Until the mid 1800s, the fun side of the fair was limited to travelling entertainers, there being no fairground rides as we know them today. Amongst the many forms of entertainment, which have long since been extinct, were performing bears and wrestling. The bears would be tethered by the neck and made to dance.  Even as late as 1893 there was a strong woman act where the lady concerned would lift a horse and in the adjoining sparring booth, visitors were invited to wrestle with a bear. Apart from this unusual wrestling act, wrestling was a local affair with only men from Bridgwater or the surrounding villages allowed to take part. They wrestled stripped to the waist and strict rules were applied whereby the opponent had to be thrown or pinned to the ground.  In latter years these were replaced by the “professional” wrestlers and boxers who performed in the booths, my father being one of them in his earlier years.  Joe and Tom Wilson, one-time lightweight champions of England appeared at Bridgwater, as did Freddie Mills and the Turpin brothers whose names were renowned worldwide. Freddie Mills appeared at the fair from 1937 to 1939 and by 1948 had become the world Light Heavyweight champion.  Next to the boxing, which was owned by the McKeown family, there was the striptease tent which usually needed a gimmick such as a knife-throwing act as part of the performance.  Next door was the beer tent, for decades the domain of Fred Cavill, the licenseeof the Hope Inn.

By the 1860s, fun rides were a regular feature with swing boats and roundabout horses, but none of the high speed daredevil rides of today.  These were propelled by ponies or young lads.  Mostly the amusements were the penny peep-shows and rather poor theatrical offerings inside canvas tents. There were equestrian displays, performing pigs and even a trained seal advertised as a talking fish!  It was in the 1880s that mechanisation and then, in the 1890s, electricity began to appear.  Steam-powered Venetian Gondolas made their first appearance, then a Roundabout and in 1886 there were steam-driven Galloping Horses.

Such was the magnetic attraction of these spectacles that the popularity of the funfair grew dramatically and it was around this time that the funfair eclipsed the original purpose of the fair as a place to trade sheep, ponies and those other commodities which previously were the mainstay of activity. The introduction of new rides such as the Big Wheel in 1905 helped to speed up this process but the travelling theatres and a circus still remained the principle crowd-pullers.