Robert Blake was born in Bridgwater in August 1598, the eldest son of Humphrey and Sarah Blake.  His home is now the Blake Museum.  Baptised at St Mary’s church, in the font which survives today, he was the first of 13 children, four of whom died in infancy, leaving Bridget as a sister, the others all boys.  Their father was a local merchant who dealt in overseas trade, giving Robert an introduction to the ways of the sea and sailors.

Blake was educated at King James Grammar School in the town until the age of sixteen when he was sent to St Alban’s Hall and then Wadham College, Oxford.  After nine years, Blake returned on instructions from his family. His father was close to financial ruin thanks to the Spanish Wars.  The following year, his father died and Robert Blake assumed the role as head of the family. 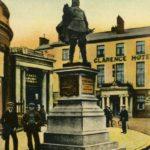 He disappeared from 1629 to 1638 but returned to Bridgwater on the death of his mother. It was a time when the country was divided between those who supported the Catholic king and those who supported a Puritan Parliament. Blake’s younger brother had already emigrated to America due to persecution for his preferred religious practice. The family were devoutly Puritan. Against this background, in 1640 Blake stood for Parliament and was elected. His time as an MP for the town was short-lived.  At the next election, Blake was defeated by the Royalist Colonel Wyndham, governor of Bridgwater Castle. However, an inquiry into a scandal, involving Wyndham and a soap manufacturing and supply monopoly, resulted in his losing his seat.  A civil war, meanwhile, was bubbling beneath the surface and Blake set about organising and training troops for the Parliamentarian cause.  Military successes quickly fell his way as the nation descended into conflict, winning battles at Bodmin, Bath and with personal success at the siege of Bristol, followed by further glory at Lyme (Regis).  Blake was declared a hero and was packed off to Taunton

Taunton was held by the Royalists but Blake was soon to capture it. He recruited and trained his own troops, mostly Somerset men who he knew he could trust.  It was with those forces that he captured and then held Taunton Castle through three separate sieges, with Colonel Wyndham once again his Royalist adversary.  Blake held out for weeks on end until re-enforcements arrived to relieve the position and the Royalists retreated to Bridgwater Castle where their turn to be besieged was about to arrive.  After the fall of Bridgwater, Blake captured Barnstaple and then Dunster.  The war effectively over, Blake returned to Bridgwater to become its MP. 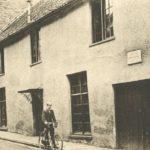 Within three years, civil unrest had arisen again in the second, albeit lesser, civil war.  The navy was divided, part of it still loyal to the Crown, the other part to Parliament.  What was left of the navy was in serious need of reorganisation.  Blake and two of his most trusted friends, Richard Deane and Edward Popham, were jointly appointed as Generals-at-Sea.  Blake and his colleagues introduced new ways of working.  For the first time, men could be promoted within their own ranks, rather than being politically appointed so that the most able would become the most senior officers.

With their revitalised, albeit small navy, they set about the capture of the Royalist fleet, action which included a siege at Kinsale in Southern Ireland where Blake’s ships waited in rough seas for months, pinning down the Royalists until a violent storm drove them to shelter in Wales.  It was another demonstration of the dogged determination of the Bridgwater man.  Cromwell felt that he was not making best use of Blake’s incredible skills and he offered Blake overall command of the New Model Army.  Blake declined, having taken ownership of re-building the navy. 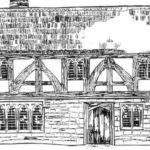 opens IMAGE file Blake’s naval successes are well documented elsewhere. Suffice it here to record that Blake continued to rebuild and improve the navy, introducing welfare for sailors.  With those better motivated crews, he defeated the residual Royalist privateers in the Channel Islands, defeated the Dutch navy under the command of Van Tromp and later de With, defeated the Barbary pirates and defeated the Spanish.  During his many sea battles, in which his tactical abilities took maritime warfare into new territory, he received numerous wounds.  At his final battle at Santa Cruz, Tenerife, having sunk the Spanish silver plate fleet, he died. 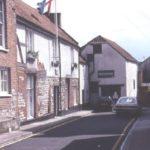 opens IMAGE file In his will, he left £100 for the poor of Bridgwater; various sums of money to his brothers and sisters; his home plus another house in the town and 11 acres of meadow at Hamp to his brother Benjamin; a gold chain, various household items and sums of money to his cousins, nephews and nieces; and £50 for his servant Domingo, to be used for his education and betterment.He had never lost his love of Bridgwater and wherever his adventures took him, he always had Bridgwater men at hand.  He is now remembered in Bridgwater at the Blake Museum which was opened to the public in 1926. Blake is also remembered by his statue which stands proud in the town centre at the Cornhill.  Built of hollow bronze by Mr. Pomeroy, it cost £1,200 and was unveiled in 1900.