Advent of the Railway 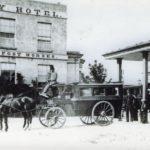 opens IMAGE file As trade from the town increased, the traffic between Bridgwater and Bristol increased dramatically.  The only way to Bristol at the start of the nineteenth century was via Bath Road, over Puriton Hill to Pawlett.  Bristol Road didn’t exist but was introduced in 1823.  But what the town really needed was a rail link.

In 1841 the long awaited railway came to town with the arrival on 1 June of the Fireball towing 6 carriages and 400 passengers from Bristol Temple Meads.  The passengers stopped at Bridgwater long enough for a champagne lunch and returned.  Almost two weeks later, the official opening took place with the band of the West Somerset Yeomanry providing the musical entertainment.

Owned by the Bristol & Exeter Railway Company, the railway reached down to Taunton the following year after the Somerset Bridge was built across the Parrett.  In the wake of the arrival of the railway, St John Street, Edward Street, Devonshire Street and Wellington Road soon sprang up where previously fields existed.

The development of the railway brought with it a need for the production of rolling stock and in 1849 a railway carriage manufacturing works opened in Colley Lane, producing rolling stock for both gauges of railway which existed, even producing narrow carriages on broad gauge bases in readiness for standardisation.  The Bristol and Exeter Railway was taken over by the Great Western Railway company, in 1876.  They also owned riverside wharves which opened in 1845 with horse-drawn wagons, replaced by steam in 1867, and remained in use right up to First World War .  They were then used as sidings until First World War l when the track was taken up to provide metal for the war effort.