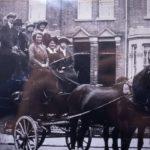 opens IMAGE file Until the railway arrived in Bridgwater in 1841, the only way to travel, other than by the river, was to walk, ride or take a horse-drawn carriage. The eighteenth century was the age of coach travel and with it all the coaching inns which served those travellers and the wagoners with the teams of horses. In the skittle alley of the Three Crowns in St Mary’s Street, there were metal rings attached to the alley wall, showing how it had once acted as a stable for the coach horses.  Most travel was during the daylight hours and since the journey to London could take 3 or 4 days, there needed to be plenty of watering holes along the route, especially when the state of the roads was so bad.  By the mid-1800s, speeds had increased to 11 miles per hour and London could be reached in a day.  The Swiftsure coach was one of those London Flyers which stopped at the Piper’s Inn, Glastonbury, Wells, Shepton Mallet, Frome and Andover on its way to the capital.

Giles and Hooper Waggons travelled to London leaving on Tuesday and Friday evening, arriving a day later.  Brown and Brice Waggons  (daily from the Rose and Crown) and Whitmarsh Waggons (Monday, Wednesday and Saturday) also offered services to London.  Snell’s covered the Bristol to Exeter trips on alternate days, their pick up point being the Ship Afloat in Market Street (Tuesday, Thursday and Saturday).  Chadwells Waggons set out from George Street with Brice’s and Martin’s Waggons using the Rose and Crown in St Mary’s Street, the latter working between Bath and Taunton. 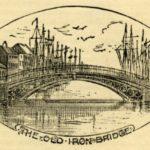 opens IMAGE file The Three Crowns in St Mary Street served Webber’s Waggons who travelled to Honiton.  Other local coach companies were Nation’s Waggons (Bristol to Minehead), Granfield’s Wagons (Bath to Minehead), Slocombe’s (Bath to Stogumber) and Lavin’s (Bristol to Wiveliscombe, up on Wednesday and down on Saturday).