Two and a half acres of gardens, alongside the river, form the Blake Gardens which were unfortunately cut in half when the Blake Bridge and Broadway were opened in 1957.  The gardens were purchased by the corporation in 1898 from Mr. R C Else.  The summer house and romantic archway which were the features of so many old photographs are long since gone.  The bandstand survives and is still used in the summer months for performances. 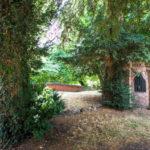 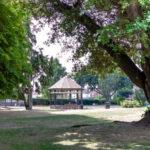