The La Ciotat twinning is Bridgwater’s oldest twinning dating back to the Borough days of the 1950’s. Over the years many youth exchanges formed the backbone of the link but in recent years support has dropped and activists have ‘aged’ leaving a vacuum .

In 2013 the remaining members of the la Ciotat link  society asked Bridgwater International to take over the running of the link which it did for 4 years rebuilding a link programme including football, choir visits and student links. In 2017 the Bridgwater-La Ciotat Link Society re-established itself in its own right and the  new Contact is Hayley Giles who can be reached at [email protected]create new email

To find out more, visit the  opens in a new windowBridgwater International website.

The Homberg twinning was conceived as part of the Sedgemoor -Schwalm Eder District twinning (SEK) (1979)  along with Fritzlar (Burnham) and Felsberg (Cheddar).The Homberg link is a  self sufficient and self contained group within the SEK network . Secretary is Ros Holman who can be reached at  [email protected]create new email

Bridgwater was the first British town to twin with a Czech town after the Velvet Revolution of 1989 and the Bridgwater Czech Slovak Friendship Society is recognised as the most active Anglo-Czech twinning link in both countries. The twinning was signed on June 18th 1992

Throughout the 1990’s the link received considerable EU funding as it dealt with an accession state and consequently when Czechoslovakia divided, with 2 accession states thus attracting 3 way partnership funding. This funding resulted in up to 500 people a year travelling between the countries for over a decade.

The Bridgwater Czech-Slovak Friendship Society is run by a committee which forms part of the Bridgwater International group, which also includes Czech, Italian and Portuguese links along with non formal ones in France, Poland, Hungary, Lithaunia, Slovenia, Croatia and Montenegro

Bridgwater International operates through a network of key agents in a series of partnership towns around Europe and organises some 30+ projects a year.The internationalist programme includes a considerable input from various departments of Bridgwater College, along with community groups , choirs, sports teams etc around the county, and is monitored by regular meetings of the Bridgwater Czech/Slovak Friendship society committee.

opens in a new windowBridgwater International maintains a web site which incorporates the Czech/Slovak programme within a broader Internationalist perspective.

The Malta twinning was set up in 2004 by Steve Gill whose wife is Maltese and who put an advert in the Mercury suggesting a Maltese link be formed. The twinning agreement was signed in April 2006 by Town Mayor Bill Monteith and the first official visit to Malta was in October 2006 by the, then Town Mayor Pat Parker. This was preceded by earlier semi-official visits by a civic party to Bridgwater by the Marsa Council in 2004 and a reciprocal visit by twinning members to Malta in 2005.

Since then there have been several formal and informal visits by Bridgwater and Marsa delegates to their respective twinned towns. The last trip to Malta was fronted by Town Mayor Alex Glassford in 2016 when he and his accompanying party celebrated the 10th anniversary of the association with the Marsa council members, organisation representatives and friends. A similar event was held in Bridgwater in May 2016 when Marsa Councillor Dominic Spencer and his family visited this town to commemorate this occasion and participated in the town’s Twinning Conference programme. Visit the  opens in a new windowBridgwater Marsa website for more information.

The twinning is run by the BRIDGWATER/MARSA TWINNING ASSOCIATION. Officers of the Association as follows: President-the current Mayor of Bridgwater (presently Graham Granter), Honorary Vice Presidents-Dr Joseph Muscat Prime Minister of Malta and Mr Ian Liddell-Grainger MP. Chair-Mike Grabner, Secretary-Pat Morgan, Treasurer-Barbara Taylor, Membership Secretary-Tricia Brown.Meetings are normally held bi-monthly at the Mayor’s Parlour. Their projects are very traditional twinning exchanges between key members and include a civic element. They also have a strong Scout content and are constantly striving to establish links with other local organisations to further the twinning ethos. They hold occasional social events and post extensive reports of their activities on their web site along with detailed meeting minutes and photos. Their on-going aim and purpose is to maintain the close relationship with their Maltese friends and partners and work with other town twinning groups. Contact is Pat Morgan: opens in a new window[email protected]create new email

On February 26th 2015 Bridgwater signed up it’s 5th twinning partner. The town of Priverno is in the province of Latina and the Region of Lazio just south of Rome. Links have been going on for some 4 years already as the twinning was based on the town also being the twin town of Uherske Hradiste.

Priverno is a small hilltop top in the foothills of the Apenines and between it and the coast stretches the former Pontine Marshes, flat, reclaimed from the sea and drained similarly to Sedgemoor. A 20 minute drive from Priverno is the seaside town of Sabaudia and the regional capital of Latina. Rome is a mere 6€ train journey away.

Links so far with Priverno have included a football tour, 3 choir visits, 3 visits from Bridgwater college and we now have a growing group of twinners in each town who keep in regualr contact. We have regular exchanges with the Teodosio Rossi school in Priverno . There is also an active Bridgwater-Priverno twinning group which holds Italian lunches at the Purplespoon cafe.(at the YMCA) in Bridgwater and which has its own  opens in a new windowFacebook Page.

The original twinning was signed by ‘acting’ Mayor Bill Monteith in Priverno with Priverno’s then mayor Angelo Delogu but was confirmed in March 2019 by Bridgwater mayor Diogo Rodrigues and new Priverno mayor Anna Maria Bilancia in Bridgwater Town Hall.

On February 26th 2015 Bridgwater signed up it’s 5th twinning partner. The town of Priverno is in the province of Latina and the Region of Lazio just south of Rome. Links have been going on for some 4 years already as the twinning was based on the town also being the twin town of Uherske Hradiste.

Priverno is a small hilltop top in the foothills of the Apenines and between it and the coast stretches the former Pontine Marshes, flat, reclaimed from the sea and drained similarly to Sedgemoor. A 20 minute drive from Priverno is the seaside town of Sabaudia and the regional capital of Latina. Rome is a mere 6€ train journey away.

Due to the hard work of former mayor Diogo Rodrigues working with the Somerset Portuguese Society a twinning was agreed with the town of Camacha on the island of Madiera, which is the home town of Diogo himself.

During 2019 a formal twinning will be undertaken accompanied by a choir trip in October. along with a civic visit. To get involved in the Madeiran twinning contact Diogo on [email protected]create new email. The link is presently run by the Bridgwater-Camacha Twinning Association. 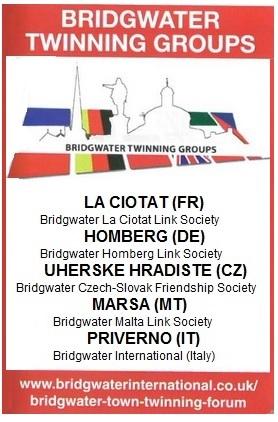 Whilst the Town does have numerous links around the world ,for instance there are 13 ‘Bridgewaters’ in the USA which all have some historical connection to Somerset, there are also recent business links with China pursued through the Chamber of Commerce. Beyond this the schools and colleges have numerous specialist links of their own , as do organisations such as Rotary, The Arts Centre and Trades Unions amongst others.

Bridgwater also has an official/unofficial/impractical link with the city of Seattle,USA based on a shared interest in punk superstar opens in a new windowJoe Strummer. This is based on the annual ‘Clash Day run by KEXP Radio, Seattle which links up with Bridgwater every February.Visit the  opens in a new windowInternational Clash Day website for more information.

These links were endorsed and are supported where possible but it should recognised that they would be impossible to finance by the Town Council .