History of the Carnival 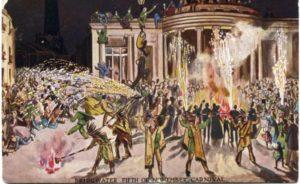 opens IMAGE file Every 5th November, across the nation, something very strange occurs. Heads are craned skywards in search of exploding star bursts.  Folks of all ages stare into the orange glow of huge bonfires.  But visit Bridgwater in November and you can witness the most spectacular night time carnival in the world.  Eighty or so major floats with bulbs in the tens of thousands, form a procession which stretches out to a full two miles.  Nowhere in the world is there such a spectacle.  It is to Guy Fawkes and the Gunpowder Plot of 1605 that we must look for the origin of our famous winter carnivals. It all began with the bonfires and burning effigies of Guy Fawkes and just grew from there.  It has now become an integral part of local culture.

On the 5th November, 1605, Guy Fawkes and his band of mercenaries were discovered on the brink of a Roman Catholic plot to blow up a Protestant Parliament.  In 1606 Parliament agreed that November 5th, from that day forth, should be a day of public thanksgiving for ‘the the joyful day of deliverance’.  The bonfire and firework tradition has survived ever since. Across London, bonfires were lit on which to burn effigies of the Pope. The practice of putting an effigy of Guy Fawkes on the top of the fire came later, as did the fireworks which we now associate with the occasion.  By 1607, the bonfire practice had spread across the nation and in parts of the country was to develop into the major events which we can witness today. Those celebrations are now part of the very cultural life blood of Bridgwater.