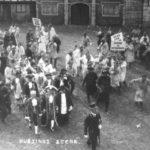 opens IMAGE file In 1754, George Bubb Doddington spent £3,400 trying to buy the Bridgwater electorate and described his experience as follows:

All this trouble and vexation and expense flows from a set of low, worthless fellows….Spent these three days in an infamous and disagreeable compliance with the low habits of venal wretches

Having described the people of Bridgwater this way, perhaps he deserved to lose, which he did, and wrote in his diary “Left the town of Bridgwater…..forever!”

It was perfectly normal for voters to be paid.  It was an expectation. In the back rooms of inns, votes would be bought and sold. The votes were referred to as commodities, the name of the commodity indicating the going price, e.g. £100 for a pig, £50 for a parrot.  The agents who took the money were referred to by pseudonyms, the man in the moon, the mysterious stranger and the bribe was a ‘packet of tea’.