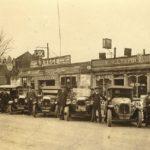 opens IMAGE file For the ladies, the war brought fresh opportunities with the demand for war work. For those with secretarial skills, there was work to be done at army bases. With the local factories turning over to the war effort, many housewives went into those factory roles. Others joined the Women’s Land Army, using and repairing tractors and working in the fields.

The local Cellophane plant produced film capable of protecting ammunition from the humid climate
of the Far East. In their engineering department they also made sections for the Mulberry Harbour which would prove so critical when D-Day came. Landing craft were manufactured by Light Buoyant at Saltlands. The Trojan Works (later the site of Wellworthy and then Bordens) made shell cases. Wicker basket for parachute drops of supplies were made all over the town and, of course, high explosives were produced at the Royal Ordnance Factory. The Electro-Dynamic Construction Company in Bristol Road made electric motors for tanks and aircraft.