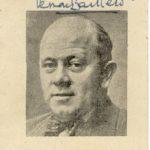 opens IMAGE file In September 1938, Neville Chamberlain was in Munich signing an agreement with Hitler and Mussolini. It was the “Peace in our time” document with which Chamberlain returned as a hero. But not everyone believed in the integrity of the agreement. Vernon Bartlett was a journalist and broadcaster with a Belgian wife. He had seen at first hand what was happening in Europe and didn’t believe for one minute that Hitler’s intentions were sincere and wanted Parliament to understand that.

In November 1938 there was a bye-election in Bridgwater in which Bartlett stood as an Independent candidate. His opponent was Patrick Heathcote-Amory who expected an easy victory in a constituency which was rock-solid Tory. Bartlett’s platform was a one-issue “Anti-Hitler” stand. The government did not want to see him win and use the Parliamentary platform to stir up the European issue. Bartlett won with a landslide and used his new position as an MP to challenge the “Munich Agreement”. He turned out to be the most respected MP the town ever had.