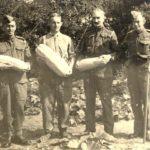 opens IMAGE file The Home Guard or Land Defence Volunteers was set up in May 1940 to protect the local area from enemy invaders. Bridgwater had its own unit, the 10th Somerset Battalion under the command of Lieutenant-Colonel R Chamberlain, based at the Drill Hall and manned by 2,500 men split into platoons. The Cellophane plant had its own, number 5 Platoon. 6 Platoon was reserved for railwaymen with a particular requirement to defend the Somerset Bridge. Membership of the LDV was in some cases compulsory. Wilf Palmer, who worked for Hancock’s, the scrap metal dealer, received a three-month prison sentence with hard labour for refusing to join. 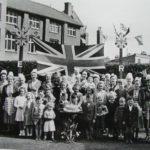 opens IMAGE file 131 Coronation Street PartyAs the war approached its end, so British POWs were being released and returned. Scores of Bridgwater men were to receive awards for their courage. The Distinguished Flying Cross was awarded to Cellophane’s Billy Hill, Brendan Baker of Camden Road who worked for the accountants Sellick and Dimmock and Robert Hooper of Northfields. The British Empire Medal went to John Coles of Kingscliffe Terrace, Taunton Road, who worked for Thompson’s the ironmongers, for dealing with unsafe explosives at sea. Clifford Searle, president of our local YMCA was awarded the Distinguished Conduct Medal for bravery in Italy where he was serving as a commando. There were of course many others, many not wanting their names to be mentioned.