The Brickyard Strike of 1896 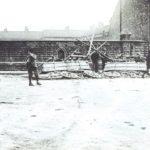 opens IMAGE file In 1896, the industrial action came to a head when the entire workforce walked out in a prolonged strike which began when the union leader handed in a claim for an extra sixpence per day to Henry James Major.  He refused to negotiate, adopting a position of intransigence.  On 26 May, the notice to strike was issued.  Eight hundred workers lay idle other than those on the picket gates.

On 8 June, there was a rally in Cranleigh Gardens where a promise of 9 shillings a week strike pay was coupled with the demand that all strike action be kept within the law. A number of marches through the streets were to follow in the ensuing days and the mayor unsuccessfully tried to bring the two sides together, Mr. Major refusing to negotiate.  On 23 June, a mass picket gathered at Barham’s Yard on the East Quay and led to Inspector Barnett leading his officers into the fray.  Three workers were arrested, charged with intimidation, receiving deliberately punitive fines.  This undoubtedly stirred up even greater bad feeling and additional police forces were drafted in.  At the end of June, Ben Tillett, a renowned trade union leader was called in to add weight to the cause.  A mass rally was called at Cranleigh Gardens where a huge crowd gathered and tempers were close to breaking point. 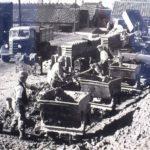 opens IMAGE file The following day, a procession of carts carrying tiles was on its way from Dunwear.  Challenged by the strikers, they were informed that the tiles were destined for the hospital and the strikers only too willingly granted free passage.  When, however, it was realised that the carts were going beyond the hospital and on to Wembdon, the strikers seized the cart.  The police were called in to retrieve the load and ensure its safe passage but the strikers recaptured the cart and 26 of them ended up being arrested and appearing in court.

Next day, police numbers had swelled with the addition of a hundred or more officers.  Harris and Tapscott were demanding that the council send the police in to take the cart.  Hostility and tempers were running high. At 7 p.m., troops from the Gloucestershire Regiment arrived at the railway station and marched, with reversed bayonets, to the Town Hall where they were billeted with the hundreds of extra police reinforcements.  Requests for them to be billeted in the hotels and inns had met with the doors of those establishment being barred and locked.  Local sympathy was clearly with the strikers.  At 9 p.m. all hell broke loose as the police charged the strikers with night sticks in an attempt to take the cart.  The strikers responded by hurling tiles as missiles.  The police were forced back and became besieged in the Town Hall with the troops and councillors.

At 3 a.m., the mayor, Henry W Pollard (founder of the local building firm), went to the Town Hall entrance and read the Riot Act as the soldiers, with bayonets fixed, forced their way into the strikers, clubbing them with their rifle butts.  A surge of police followed and this tactic of force and surprise dispersed the crowd.  Injuries were high including a young female reporter who failed to move quickly enough when the rush came.  With this action, Bridgwater came under military rule for the first time since Cromwell.  Two days later, a union ballot was held and the vote, to the amazement of the brickyard bosses, went in favour of continuing the strike.

The financial burden of the strike had been enormous.  On 5 July, the strikers buckled under the financial hardship and voted for a return to work.  The following year, wages were increased from 12 to 15 shillings per week and the working day reduced to just 12 hours.

The brickyard industry underpinned the local economy for decades, until the end of First World War l.  Although it was already in decline with home market competition, the regeneration of war-torn Europe heralded the automation of brick-making, a process for which the local clay was too heavy, being too stiff in its consistency to pass through the brick-making machines. Alternative products, such as concrete blocks, also ate into the market. Competition from the London Brick Company finally saw off the brickyards in 1965 when Barham Brothers ‘fired’ for the last time and in 1970 Colthurst Symons closed their Castle Fields works.