Somerset’s Duke of Edinburgh (DofE) Award team has received a special tree from the Queen’s Green Canopy ‘Tree of Trees’ as a thank you for the valuable work the team does for the benefit of the community.

Designed by artist Thomas Heatherwick, the Tree of Trees sculpture made up of 350 smaller British native trees stood tall outside Buckingham Palace during the Queen’s Platinum Jubilee celebrations this year.

Somerset DofE is one of 300 organisations from across the UK who were recently announced as recipients of one of the special trees. The tree was gifted in a pot embossed with Her Majesty’s cypher.

Presented by Annie Maw, the Tree of Trees was planted at Kilve Court on Friday, October 14, alongside a further 90 saplings as part of the Queen’s Green Canopy initiative.

The tree becomes part of the living legacy in honour of Her Majesty, joining over a million trees already planted across the UK as part of The Queen’s Green Canopy.

Carol Authers, Somerset DofE Operations Manager, said: “I am so pleased that Somerset DofE has been recognised for their work supporting the Queen’s Platinum Jubilee across the county this year.

“Many DofE participants were involved in supporting the Queen’s Green Canopy initiative as well as joining the Lord Lieutenant Annie Maw on the various legs of her Jubilee Jaunts challenge.

“This tree will be a lasting legacy of a fantastic year, and will be seen by visitors to Kilve Court for years to come.

“My thanks go to Polden Bower and Haygrove School, for joining us to plant the saplings and Tree of Trees. As well as the Greater Quantock Landscape Development Fund for supporting our funding bid to enable us to add more trees to the landscape at Kilve Court as part of the QGC initiative we started earlier this year.”

Annie Maw added: “Congratulations to the Somerset DofE team who have been given recognition for all that they have done supporting the Platinum Jubilee celebrations.

“I was grateful to the DofE participants who joined me during my Jubilee Jaunts this summer, and to the DofE staff who helped organise and support the events.

“It is fitting that we can plant this tree at Kilve Court, where so many of the DofE participants spend time achieving the various sections of their DofE awards. The people of Somerset are pleased and proud of all they do.”

For more information about the Duke of Edinburgh Awards in Somerset, contact [email protected]create new email. 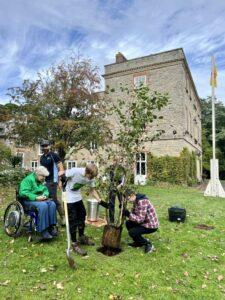 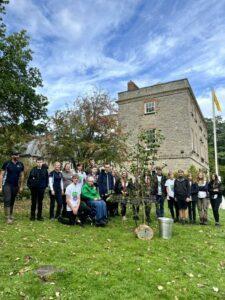