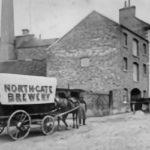 opens IMAGE file The first hint of an air raid for Bridgwater came on 1 August 1940 when a Heinkel HE 111 dropped a landmine at Bankland Farm, Northmoor, leaving a huge crater.  The impact of the explosion was felt in Bridgwater although no damage was done.  Two weeks later there was a minor air battle over Puriton Hill where a Heinkel was shot down.  The five German aircrew parachuted to safety except for one being shot and wounded on the way down.  They were all captured and taken into Bridgwater.

Later that month, on 24/25 August, Bridgwater was visited by a German raider who we must assume had failed to find his intended target and was flying home over Bridgwater when he released around 200 incendiaries which landed across Cranleigh Gardens and the brickyard at Colley Lane, and then released his heavy bombs over Southgate Terrace in Old Taunton Road, where six houses were damaged with three more destroyed. Seven people were killed.  Daisy Balham was killed by the blast and her body was found, still seated on her chair in the cupboard beneath the stairs, bag of runner beans in one hand and paring knife in the other.  ARP Warden Len Wilkins, woken by the alarm signal, was putting his boots on as he was killed instantly along with his wife Gladys and thirteen-year-old daughter Margaret.  A Mr. and Mrs. Collard were also killed.  One unlucky brickyard worker had actually been told to go into his home, in which he was killed, for his own safety.  It was the colleague who gave him that advice who was later to drag his body from the debris.

The next raid was that of a single Junkers in the early morning of 1 October 1940.  Having flown over the town, it released its high explosive load harmlessly on Geoff Moate’s farm near Kidsbury Road, one bomb failing to explode.  Much damage was caused around the town when two magnetic mines exploded on the night of 20 March 1941.  They were dropped in the Meads near the Fairfield but such was the blast impact that nearly 1,500 town premises had their windows blown out and one person was killed.

In October 1941, a German plane was shot down over Wembdon, the pilot killed.  His uniform was recovered and ended up on display in the window of the Bridgwater Gas Company with parts from the plane and arrows pointing to the blood of the dead German officer. Mary Walbridge vented her anger, pointing out that he may have been the enemy, but he was still a mother’s son. Bridgwater was fortunate in how few raids it was to suffer, compared to elsewhere.  The ARP records for the duration indicates a total of 263 high explosive bombs, 6,671 incendiaries, 2 oil bombs, 10 land and other mines, 63 unexploded bombs, 1,638 buildings damaged and 4 enemy aircraft shot down. All of this came in the Bridgwater area.