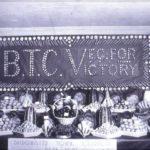 opens IMAGE file Life was changing rapidly. Food shortages and rationing, the disappearance of the menfolk and the introduction of the black outs soon led to the cancellation of all kinds of events, even the town’s carnival procession. Bridgwater Fair turned up with one motor cycle show and one set of dodgems and by 7 p.m. it was ‘All lights out’. Throughout the war, food, petrol, clothing and many other essentials were in short supply. Rationing was introduced and the nation encouraged to “Dig for Victory”. By 1943, 600 new allotments had been created and breeding rabbits for meat and keeping chickens was common practice. Hoarding became an issue which was discouraged by the government and promoted by the shopkeepers.

The initial ‘buzz’ after the outbreak of war turned to concern and sadness as news came through of
fatalities overseas. Everyone dreaded the arrival of the young telegram boy bearing the message from the Ministry of War. Two weeks into the war, the Mercury reported the loss of the aircraft carrier HMS Courageous with 500 lives. Charles Wood of Cecil Terrace was one of the survivors, having clung to a piece of timber for an hour before being picked up. Cecil James, who worked at the Van Heusen shirt factory before the war, was one of four Bridgwater men to go down with the ship. The others were William Buttle of Athlone Road, Alfred Croker of Durleigh Road and Petty Officer Granville of Rhode Lane.