Bridgwater Mayor said “This promotion, open to all Somerset residents, will help local people start saving, it is open to the first 50 new members to join the Somerset Community Credit Union from today who successfully manage to save at least £10 a month for 3 consecutive months. In return for joining and demonstrating their willingness to save, they will receive a £25 bonus, completely free provided by the England Illegal Money Lending Team and taken directly from the Loan Sharks themselves.

Together we are biting back against the loan sharks and making them pay.”

The Somerset credit Union launched 25 years ago, run by volunteers since 1996 the Somerset Community Credit Union, after several mergers, has grown steadily.

The members share a common bond, by either living or working within Somerset and pool their fully protected savings together to be able to grant low-cost loans to their fellow members.

The opens in a new windowEngland Illegal Money Lending Team was set up in 2004 to initially investigate Loan Shark activity around Birmingham and has since grown to investigate and prosecute all illegal money lenders within England. In addition to this, and extremely importantly, they also support those who have fallen victim to these loan sharks. To date they have supported over 30 thousand people and written off over £87 million worth of illegal debt.

Raising awareness, educating, prosecuting and providing help and support against loan sharks is vital to help protect our local communities.

Cllr Redman finished by saying “Somerset Community Credit Union would welcome new members, with this scheme they could qualify for a £25 bonus, so there has never been a better time to join.”

New members can go along to one of the sessions or apply online. 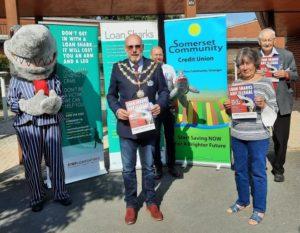 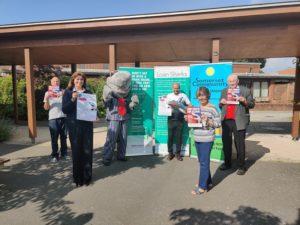