Handmade wreath for the Mayor to lay

In September at The Seed the Day event, two members of Victoria Park Knit and Knatter group (Pat Morgan and Janet White) were asked by the Town Clerk, David Mears if they could make a wreath for Remembrance Sunday.

The ladies went back to the group where ideas were discussed and several ladies offered to help. As they had patterns, plenty of red and green yarn, and some regularly make poppies for the British Legion every year, they agreed to help. Pat then went back to David to get an idea of size needed.

Pat ordered a circular wire base and when arrived, Kay Coombs offered to take it and wound old bandages around it to make it the correct shape; she then crocheted a green base to cover it and to be able to attach the poppies and leaves to it.

Pat Morgan, Pat Crick, Janet White, and Nicky Biddiscombe, along with Kay made many poppies and foliage. It was then given to Kay who attached all to the base. When completed, they were pleased with it and Pat delivered it to the Town Hall where the Council logo was attached to the middle.

It was laid by the Mayor, Councillor Leigh Redman on Armistice Day on 11th November and an official handover was done on Sunday prior to the parade by Pat Morgan.

Victoria Park Knit and Knatter group meet every Tuesday and Thursday 10am – 12pm in the cafe on the park at Victoria Park Community Centre. You just need to buy a drink while you are there as you are welcomed without any charge. They are a friendly group who share ideas and learn from one another no matter what your skill level is and they knit and crochet. All are welcome. 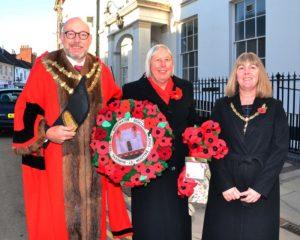