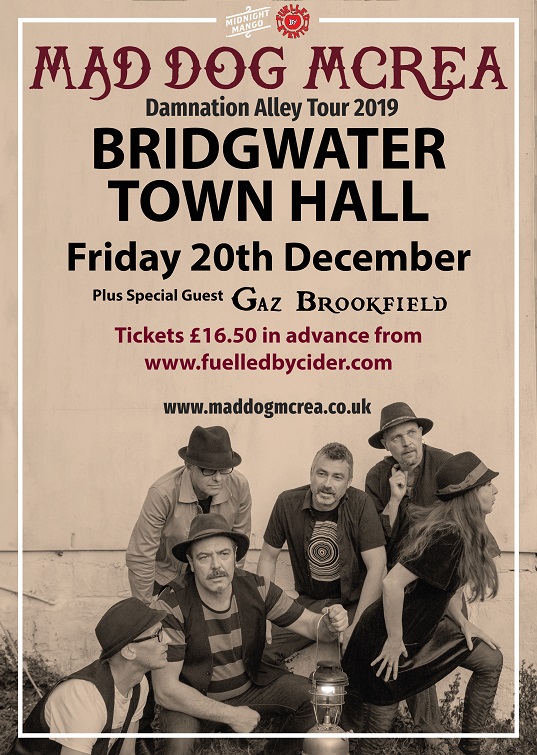 Previous gigs have sold out in advance so early booking is recommended.

Ticket holders must be aged 16+ and under 18s must be accompanied by an adult.

MAD DOG MCREA
Mad Dog Mcrea blend a unique mixture of folk rock, pop, gypsy jazz, bluegrass and ‘shake your ass’ music. From self-penned songs of adventure, drinking, love and life, to traditional songs of gypsies, fairies, legless pirates and black flies – Mad Dog never fail to capture their audience with their infectious songs. In constant demand and having played just about every festival and two-bit, jibe-arsed dive in Christendom, Mad Dog Mcrea are, in every sense of the word, a live, band.

Matched with the unshakable dedication of their massive and “loyal-to-the-hilt”, fan base – Mad Dog Mcrea are more than just a very popular, festival act – with five albums under their belts, they are serious and acclaimed recording artists too. During 2019 Mad Dog Mcrea will be in the studio recording a new album.

The famous purple happy bus is fired up and ready for action, and there’s room for you – jump aboard!

GAZ BROOKFIELD
Gaz Brookfield is a solo acoustic musician based in Bristol.
Since winning Acoustic Magazine’s singer songwriter of the year competition back in 2010, Gaz has spent his time touring the UK and Europe. During this time, he has had the pleasure of sharing the stage with the likes of The Levellers, New Model Army, Seth Lakeman, The Wonder Stuff, Newton Faulkner, Frank Turner and many more.

A festival favourite, Gaz has played at over 100 festivals in the last few years, including Glastonbury, Beautiful Days, Bearded Theory and Boomtown. Gaz is an entirely independent musician, operating without the aid of a manager, record label or agent.